We Are Excited to Announce Our New MD Appointment 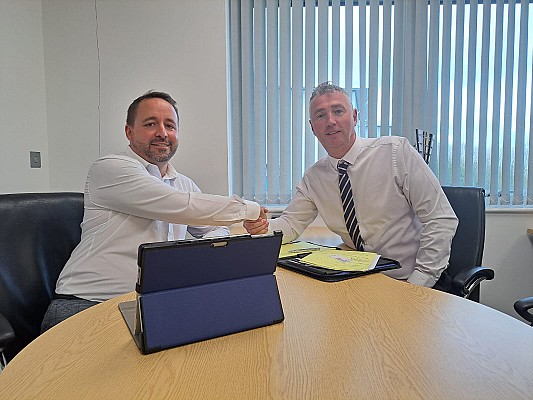 Steve Baker handing over the reins to Jon McFarlane.

Steve Baker hands over the reins to Jon McFarlane.

Following over ten years with the company, most recently in the capacity of Operations Director, we’re thrilled to announce the promotion of Jon McFarlane, who has stepped into the role of Managing Director this week.

Steve founded Laser Electrical just over two decades ago with the aim of creating a family of experienced electrical contractors committed to providing a high-quality, personal service.

We've grown tenfold since then and have progressed substantially, resulting in continued growth in size, sales, reputation, and recognised certification within the trade while remaining true to our original ethos.

Now, having experienced one of our most successful years, despite many economic challenges, we're ready to begin what should be our most exciting chapter so far, and one that Jon can't wait to grab hold of.

"I feel hugely fortunate to have this opportunity," says Jon. "It's a huge privilege that Steve has seen in me the qualities needed to help take the business forward.

"Steve has been and continues to be an amazing mentor who built something genuinely special in Laser Electrical and cares tremendously about the company and all its staff. He has provided me with incredible support and guidance as I've gradually grown my responsibilities in recent years, culminating in my promotion to the role of MD."

Steve comments, "I felt it was time for me to make this appointment to commence the next phase of Laser Electrical's evolution. This is certainly not a goodbye from me but an opportunity to step back, focus on my strengths, and ensure the Laser ethos is integrated across all of our businesses, regardless of geographical location.

"There is a tremendous amount of opportunity for Laser Electrical and seizing that will require the entire team to move together in the same direction. I'm proud to say that we have an excellent team of directors who are all immensely committed to the company's cause. I am particularly excited to see Jon lead us to our next chapter."